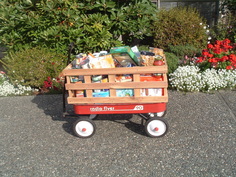 The Red Wagon is a real Radio Flyer Red Wagon.  It is rolled through the worship services on the second Sunday of each month.